Do you remember a TV show called Extreme Makeover: Home Edition? I hear it’s been revived recently with some brand new episodes, but the original series aired between 2003 and 2012. There were a lot of home remodeling shows back then, but Extreme Home Makeover was different. It chose worthy families living with difficulties or special needs, and completely revamped their homes to make them livable.

One such family was the Hughes family from Louisville. They had a son named Patrick who was born without eyes. In addition to that, he was also unable to bend his arms or legs. So not only could he not see, he also couldn’t walk— in fact he couldn’t even stand.

What he lacked in sight and mobility, however, he compensated for in hearing, imagination, intelligence, and determination. His dad discovered early on that Patrick liked music, and when he introduced him to the piano, he took to it like a virtuoso. He could also play trumpet. And so after high school graduation when he enrolled in college, the marching band director heard about him and invited him to try out.

It was a ridiculous notion, of course. How could a blind kid in a wheelchair possibly participate in marching band? But he did, with his dad’s help. While he played the trumpet, his dad pushed his wheelchair through all the movements and formations, and he ended up being a fully functioning member of the University of Louisville’s Cardinal Marching Band. He even won Disney's Wide World of Sports Spirit Award, which is awarded every year to college football’s most inspiring individual or team.

Patrick’s parents were honest in sharing how they thought all their hopes and dreams seemed to vanish when Patrick was born with what most people think of as disabilities. But they were people of faith, and they soon learned that God’s plans for Patrick were still very much alive. Lots of people use the bad things that happen to good people as an excuse not to believe. But not the Hughes family—especially Patrick. In fact, when he talks of his blindness, he says very matter-of-factly that it’s not a disability. He thinks the true handicap is to be able to see and only look at the surface. He’s always been gifted with the necessity to look much more deeply at things and (especially) other people— to listen to them and empathize with them. Minor things like people’s appearance never get in the way of Patrick’s getting to know his neighbor.

So let’s insert Patrick Henry Hughes into John 9. Let’s imagine that Jesus and his disciples were attending a football game when at halftime the marching band took the field. And let’s imagine the disciples, upon seeing the young man who could neither walk nor see, asking Jesus, “Rabbi, whose sin caused this, the young man or his parents?” Jesus’ answer— “Neither! This man is the way he is so that he might glorify God!”— makes a lot of sense, because glorifying God was exactly what Patrick chose to do with his life. 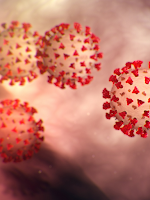 Let’s fast forward to March 2020. I was talking about the current situation in the world with somebody who said that they thought God was punishing all of us for our sinfulness. He’s not alone, of course. There’s no shortage of preachers—some of them with TV shows— who are quick to blame the sins of others for the pandemic that we’re now dealing with.

But would Jesus agree?

The answer is a resounding No. Not just in John 9, but also in other places—such as the beginning of Luke 13— Jesus makes it clear that, when bad things happen to people, it’s not because they’re bad, or more sinful than anybody else. But it’s here in John 9 that Jesus gives the best reason of all for difficulties that we have to face: They happen so that God might be glorified. This is as true today as it was when Patrick Henry Hughes played trumpet in the Cardinal Marching Band. And it was as true back then as it was in Jesus’ day. We’ll always be able to find bad things happening in the world. But if we see in them God’s method of reward or punishment, we’re missing the point. And we’re missing it badly. In wonderful things and happy events, we praise God for blessings bestowed. But in difficult situations, God is no less present.

One way that God is present is in the pain itself. We can never understand how, I don’t suppose. But in the indelible image of the Crucified One, we know that God is at work in pain, bringing good out of bad. 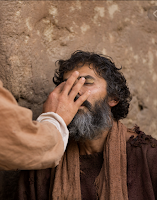 But when we continue to read the story in John 9 of the man born blind, we see that how we deal with difficulties—our own and other people’s—is also an opportunity to glorify God. In this story, Jesus heals the man. Now, we all know that Jesus could’ve simply spoken a word and the man’s sight would’ve been restored. But John tells us that Jesus spit into dirt in order to make mud, and he spread that on the man’s eyes.

Why he did this becomes clear when we find out that it was the sabbath. Jesus wanted to challenge people’s beliefs about working on the sabbath— even working for good. Speaking a word in order to heal may or may not have been work. But manufacturing a paste: that was considered work by every standard in that place and time. Not only was Jesus challenging the idea that disability or disaster or illness were God’s judgment on sinfulness, but he was challenging a religious practice that many considered to be unassailable: Sabbath rules could never be broken by faithful people.

I have had to deal with my own attitudes toward religious rules that cannot be broken. I never thought I’d live to see the day when we could not worship together. I’m not just talking about the occasional blizzard in the dead of winter. I’m talking about an ongoing policy that causes us to call off church services for not just one Sunday, but for every Sunday until further notice— maybe even including Easter Sunday.

So how can God be glorified in a time of pandemic, when we’re not even allowed to gather together and glorify God in church? To me the answer lies in continuing to be the church. Now, more than ever before in most of our lives, we’re realizing that the church is not a building, no matter how much that building means to us. Our wonderful old church building is a tool that God has given us to use as we can to glorify God and to reach out to our neighbors. But it’s the people who comprise the church.

We still have a food cupboard that we’re using to feed people. They now knock on the church door with a form they’ve filled out, and our volunteers deliver food to them in their cars. It’s different, but we’re serving more people now than we did before the crisis. 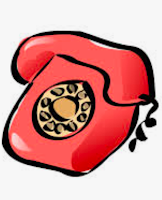 But there are other tools. Such as the internet and phones. We may not be able to visit each other. But we can call our sisters and brothers in the church and see how they’re doing. We can text each other or post encouragement on social media. We can spread the latest information through email or telephone. We’re already finding new ways to be present for each other, and we’ll find even more as we move forward in time.

But another tool that I hope we haven’t forgotten is the most important one of all— and that’s prayer. As we experience down time because we’re sheltering in place, or alone time because we’re social distancing, let’s not waste it complaining—at least not all of it. Let’s spend more time than ever in communion with our Creator.

And I’m not saying that we cannot ask Why. As we saw in John 9, blind obedience is not always a good thing. Jesus challenged the status quo and approached God when others said he should leave well enough alone.

So ask God Why. But also ask God how you can glorify the Eternal One during the current crisis. And ask God how you can spread the love of Christ abroad even when we must isolate ourselves. Now, more than ever before, it’s not only possible, it’s necessary. But the good news is that this part is easy. And many of you are already doing it. Use the resources that you’ve already got to comfort the frightened and lift up the lonely. God is already with them. And through God’s Spirit, the body of Christ can remain together, even when we’re apart.