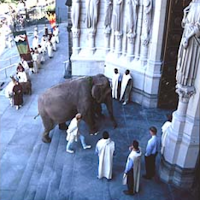 Today is the first Sunday of autumn.
The scripture read in today's worship service was Mark 9:38-41. The hymns included Amazing Grace, In Christ There Is No East or West, and Pass It On. The sermon title was The Elephant in the Room, which addressed head-on two verses of scripture in which Jesus appeared to contradict himself.
Here's a complete video of the worship service, and beneath the video is a transcript of the sermon in its entirety.
The Elephant in the Room

Whoever is not with me is against me. ✚ Matt. 12:30
Whoever is not against us is for us. ✚ Mark 9:40
Think about the worship services you remember most in your life. Hopefully they’re all good ones, but I guess it’s possible that a bad worship experience might have wormed its way into your memory. If that’s the case, then I am very sorry. But of the good ones, what is it you remember? Was it a moving sermon? Was it incredible music? Was it a feeling in your heart that you cannot describe? Maybe it was the people you were with at the time.

My life is pretty much lived out in church, so there are lots of worship services that I remember—and just about all of them are good memories. But there’s one that stands out, and I want to share a little bit about it with you now.

It happened at this time of year almost exactly. I looked it up and the exact date would’ve been October 6, 1985. I was in seminary in northern New Jersey at the time, and like just about all my classmates, I was employed part-time by a church. But for some reason, and I don’t remember why, I had a Sunday off, and so did my friend Nancy. So we decided to go into Manhattan that day and attend service at the Cathedral of St. John the Divine. This is a very strange church—it remains unfinished after more than a hundred years, but even so, it is one of the ten largest church buildings in the world.

Now, because we were coming from across the Hudson and 25 miles away, we gave ourselves plenty of time. We didn’t run into any delays, though, and we were among the first to arrive. As other people began to fill the nave (that’s what you call the part of a cathedral where people sit), we couldn’t help but notice that they all had animals. There were lots of dogs, of course. But there were cats and birds and even stranger pets. It was about this time that we realized that this was the day they were celebrating the Feast of Saint Francis, which included a blessing of the animals. According to the bulletin we were handed as we entered, the music that day was going to be Paul Winter’s Missa Gaia, which is a contemporary earth mass.

This was all a bit overwhelming for people who weren’t expecting it. But we were definitely not prepared for what happened when the service began. It started out with a procession of the animals down the center aisle. First came some house pets. Then some common farm animals—including a sheep, a cow, a donkey, and a horse. This was strange enough, but then the animals started getting more and more exotic: a camel, a llama, and a zebra came down the aisle. I can’t remember them all, but I remember the last one: At the end of the procession came marching a baby elephant. I don’t know if there’s an elephant every year. But there certainly was an elephant in the Cathedral of St. John the Divine that year.

Which brings me to my topic of today. And that’s the elephant in the room whenever we hear Jesus’ words in today’s scripture reading. Some of you probably already noticed it. The rest of you won’t be able to take your eyes off it once I point it out. So let’s get to it.

The disciples had already been a source of some exasperation for Jesus. As they were walking, he heard them arguing about who was the greatest. Naturally they’d have all agreed that Jesus was the greatest had he been part of the argument. But he wasn’t. Until he made himself part of the argument. He stopped along the way, picked up a little child, and said, basically, you were comparing each other’s greatness, but I’m comparing myself to this little child. If you want to see how I see myself, look at this little girl.

That should’ve shut them up, but it didn’t. It was at this point that John—specifically St. John the Divine—decided he’d divert the attention to somebody else. “Teacher, we saw somebody cast out demons, but they weren’t one of us, so we tried to stop them.”

Jesus said, “Why would you stop somebody from doing something good? If they’re doing a powerful deed in my Name, they’re not exactly going to turn around and say bad things about me.” Then he went on to say, “Whoever isn’t against us is for us.”

That’s a great saying. But whenever I hear it, I can’t help but think about Matthew 12:40. There, Jesus said, “Whoever is not with me is against me.”

And that, brothers and sisters, is the elephant in the room. How can the Jesus of Matthew say one thing and the Jesus of Mark say the exact opposite? Is it the case that if you’re not with him you’re against him? Or is it the case that if you’re not against him you’re for him? This reminds me of a line in the classic Dire Straits song, Industrial Disease: “Two men say they’re Jesus; one of ’em must be wrong.” So is one of these two Jesuses is simply wrong? Here, certainly, we’re going to have to look at context to find out.

Context is the enemy of anybody who wants to use the Bible as a weapon to judge others. Taking verses out of context is a great way these days to keep women and homosexuals in their place, for example. Two hundred years ago, the Bible was used to tell slaves to be obedient. We can find individual verses to condemn divorce and lots of passages in the gospels and the Book of Acts that tell people to give up their private property. What’s interesting is how indifferent to context we are if the condemnation can be applied to somebody else, but how desperate we are to find the context so we can avoid making changes in our own lives.

But here in the case of these two sayings of Jesus, I think all of us are equally interested in knowing if context makes a difference. So let’s look at Matthew 12. Here we find people actually accusing Jesus of being an agent of the devil. Jesus’ response was to point out the nonsense of this accusation: How can Satan cast out Satan? “A house divided against itself cannot stand,” he says. He hasn’t come to divide, but to gather people together under God’s gracious rule in one kingdom. “Whoever is not with me is against me, and whoever doesn’t gather with me is scattering.”

Even though it’s not describing the same situation, the context is surprisingly similar in Mark. It has to do with casting out demons. But in this case, there’s no accusation against Jesus. The disciples want to divide the servants of God into us and them. And here, Jesus says to let others do good works in his Name, for “if they’re not against us, they’re for us.”

What’s amazing then, is that we don’t need to do any mental acrobatics at all to make sense of these two seemingly contradictory verses. The solution to the problem is context. Jesus is actually saying the exact same thing in both: He came to unite people under God; if someone is working to divide they’re against him, and if someone is doing God’s work they’re for him. So, we’ve addressed the elephant in the room, and like the one in the procession of the animals in the cathedral, it turns out it’s just a baby.

In his gospel, John records Jesus’ farewell discourse on the night before his crucifixion. It’s four chapters long. The final chapter is a prayer—it’s known as Jesus’ High Priestly Prayer—in which he prays twice that we may all be one (17:11, 21). Because this happened just before he died, I think we sometimes pretend that Christian unity wasn’t all that important to Jesus during the rest of his ministry. But when we stand that assumption up against the two verses we looked at today, I think we have to admit that unity among his followers was something that Jesus emphasized long before the crucifixion. He spoke of it in very strong language. We don’t find many other places where he’s willing to use the language of for and against. But here he goes out on a limb: If you wish to divide God’s people, you’re against me; if you work together in my Name, you’re for me.

So when you think about it, if Jesus emphasized it and if he prayed for it, then whenever Christians unite across the labels that divide us, that’s one of those things Jesus mentioned in this morning’s scripture passage—you know, when he said that “anyone who uses my Name to do powerful things will not easily say evil things about me.”

Most of us don’t aspire to perform exorcisms. We have a very different understanding of physical and mental illness than they did back 2000 years ago. But there are other “powerful things” that we can act on in Jesus’ Name, and one of them is reaching across the labels—the denominations and religious movements—that separate us. This passage directly addresses the fact that different kinds of followers of Christ can and should work together to gather God’s children together.

And finally there’s that last bit. It’s related, but not exactly the same: “Whoever gives you a cup of water to drink because you belong to Christ will certainly be rewarded.” There are those who aren’t Christians—perhaps not even believers of any sort—who nonetheless show kindness to us. We know that Jesus occasionally used strong language—very judgmental language—when he spoke to religious leaders who tried to divide the people, or who used religion to their own advantage, or who put down the hungry and the oppressed. But you won’t see him talk that way about sincere people outside the faith. Like the woman at the well whom he asked for a drink, he engaged them in dialogue. Serving one another and building bridges—these, too, are deeds of power that count for something in the kindom of God. So let us be about God’s work of love and liberation, and let us join in with anyone else who is showing kindness in the Name of Christ.
—©2021 Sam Greening, Pilgrim Christian Church