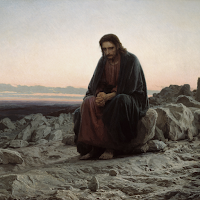 Today is a big day at Pilgrim Christian Church. It's the first Sunday in Lent. We're renewing our covenant. And we're introducing the youth in our faith formation (confirmation) class. The sermon talks about Jesus' temptation in the wilderness. Our two hymns were very strong Christian Church (Disciples of Christ) hymns: We Call Ourselves Disciples and When You Do This, Remember Me.

Here is a video of our worship service (click "read more"), and below that are the words of our church covenant and the entire text of the sermon.

Pilgrim Church Covenant
We covenant with God and one another to seek to understand, receive, and proclaim the Gospel of Jesus Christ; to worship God through word and sacrament; to live and grow in the grace of God; to be the people of God; to realize Christian fellowship and unity in this church and the Church Universal; to be servants of Christ in the service of people; to seek the kingdom of God; and to promote righteousness, justice and peace.
Before the Beginning
Jesus, full o f the Holy Spirit, returned from the Jordan and was led by the Spirit in the wilderness.
—Luke 4:1
Let’s face it, the beginning is never really the beginning. There’s nothing in my life that is a pure beginning. Nothing in yours either. Who we’re in a relationship with, what we do for a living, where we live, where we went to school—all of it had a beginning before its actual beginning. Even our own lives have origins before the beginning. We’re part of communities that help define us. And those communities existed before we came along. People’s interest in DNA and genealogy is also a testament to the fact that our lives didn’t begin with our birth.

The other gospels have different ways of starting out. But it’s Luke we remember most. There we find the manger and the shepherds. But early on in Matthew, Mark, and Luke we also find Jesus’ baptism. He is baptized by John, and it’s a baptism of repentance. It’s not that Jesus was a sinner. But he still felt the need to turn his life around—to go in a new direction. The Greek word here is metanoia, and it just means changing or turning around.

So what we have in this morning’s scripture reading is a beginning. But it happens between two other very distinct beginnings. His time in the wilderness happens right after his baptism and immediately before he opened the scroll in the synagogue and declared that the scripture was fulfilled.

And so Jesus’ temptation in the wilderness was something that happened before the beginning of his ministry. It had to happen, so that Jesus would see what he was made of, and what he would have to withstand if he were to go down the road that lay ahead of him. We don’t know exactly when he made his way into the wilderness. Nor do we know where this wilderness was. For us it is as though it were no place and beyond time. And there he fasted for forty days and forty nights.

In both Romans 10 and Deuteronomy 30, we read that “the word is near you, on your lips and in your heart.” And in the life of Jesus, we see how true that is. In his weakened state, he should easily have succumbed to temptation. But that was the point of becoming weak. He did so, so that God would be that much stronger in his life. And instead of depending on his own power to make it through his trials, he depended on God. Each temptation was met not by human strength or human wisdom, but by the word of God:
Though only thirty years old, Jesus had lived a life immersed in the word. And it was the word that inspired and strengthened him in the face of temptation.
Jesus’ temptations are not our temptations. Of course they’re not. Ours are not so lofty. Even so, now’s the time to think about them. I mean, really think about them. What is it that threatens to lead us off the path of Jesus? I don’t think any two of us experience life in the same way. No two of us have the same spiritual life. And so each of us experiences temptation differently.

But no matter what it is that wants to lead us astray, we can respond to it as Jesus did. When we are weak, God is strong. When we are ignorant, God is wise. And when we are speechless, God’s word is heard most loudly.

But if anyone does sin, we have an advocate with the Father, Jesus Christ the righteous. If we confess our sins, he who is faithful and just will forgive us our sins and cleanse us from all unrighteousness [1 John 2:1, 1:9].

This may all sound like outmoded religious talk—all this talk of temptation and repentance. And maybe it is. But it’s also the beginning of the beginning of change. Once Jesus had changed the direction of his life and then faced the worst that the world could throw at him, he announced that the time had been fulfilled. Change was on its way. God’s new world was at hand.

And this is the way it can be for us. This is why we observe the Lenten season in the first place. The Easter Sunday sun rises on a new landscape. And so before we reach that Realm of God, we need to take stock of who we are and whose we are. We spend this time more fully immersed in God’s word. We re-consider our priorities so that we can put God in the proper place in our lives. And we examine ourselves, admit what’s wrong, and ask for forgiveness.

This is why worship during this season is different. We need a jolt to help us wake up, see what’s wrong, and set things right. Because, truly, our lives are not lived with the full integrity God created us to have. Our world is not what it should be. Selfishness reigns within us and violence seems dominate all that surrounds us.

We know we can be better and do better. So let us empty ourselves of what not be there, and let us trust in God for the strength to love all people, and for the courage to stick to the path of Christ, even when it’s not the popular thing to do.
—©2022 Sam L Greening, Jr.