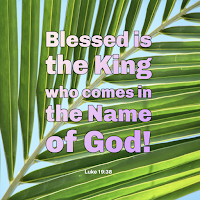 Today was Palm Sunday, and the worship service began with the proclamation of the Palm Sunday gospel from Luke 19. The scripture that was read during the service came from Zechariah 9.
Music included the hymns All Glory, Laud, and Honor and When I Survey the Wondrous Cross, as well as a choral anthem entitled Jerusalem, My Happy Home.
Here is a video of the service (click "read more"), beneath which is a transcript of the sermon in its entirety.

Prince of Peace
He will cut off the chariot from Ephraim and the war horse from Jerusalem; and the battle bow shall be cut off, and he shall command peace to the nations.
—Zechariah 9:10
It’s never a good idea to stop thinking, to stop growing. It’s not good just to be satisfied with what you already know—because it might just turn out that you don’t know what you thought you knew. Case in point: Palm Sunday. Of course I know the story of Palm Sunday. I’ve known it since I was old enough to march down a church aisle with the other kids, waving a palm branch. I’ve been reading it since I was old enough to pronounce (most of) the words in the Bible. I’ve known it since I started preaching on it every year 35 years ago.

But something’s changed this year. Research. No, I’m sure I’ve read commentaries on the Palm Sunday passages before. But probably not in a while. But this year, I returned to the books. And I discovered something that I don’t think I knew before.

First, it seems important to point out that I always—or almost always—talk on Palm Sunday about how Jesus was received as a king, but not in the way people expected. As a king, he’d have been expected to enter the city on a magnificent horse—maybe a white horse, maybe a warhorse, maybe even a white warhorse. And then I’d build my Palm Sunday sermon around the unexpected humility of the donkey.

But I think maybe I was wrong. Perhaps the people welcoming Jesus into Jerusalem as king might have gotten excited about the horse. In fact, I’m pretty sure they would have. Perhaps the donkey was a surprising development—but not outside the crowd’s imagination and definitely not beyond their knowledge.

Our culture, of course, would never place a king on a donkey. In the United States our dignitaries are driven about in motor vehicles. They used to be Lincolns and Cadillacs. Now they’re more likely to be large black armored SUV’s. But we all know that if an elected official (or a candidate for elected office) was seen riding a donkey, that would be the end of their credibility. Their political opponents would get so much use out of such a silly sight that we’d never hear the end of it—we’d never see the end of it, either, since it would appear on negative TV ads from now until doomsday.

But the ancient Middle East had its own culture, of course, and horses played an important rôle in the people’s idea of royalty. When a ruler was marching off to war, he (and, yes, it was always a he) would be seen on a horse. But did you know that when a ruler was coming in peace, he would ride not a horse, but a donkey? And though war was no doubt an exciting time for the people, peace was always better. War draws attention and resources away from what people need. War ends lives. War is as likely to bring about changes for the worse as it is changes for the better.

But during peace time, there are other priorities. Agriculture, schools, lifting people up out of the gutters, building houses and places of worship, helping small businesses thrive—all the things that get overlooked when a country is dedicating all its resources to weaponry.

Well, there was another king in that part of the world in those days. His name was Herod. And he had forgotten all about the ancient Hebrew traditions. He was committed to Caesar and the way Rome did things. And he always rode a horse when he was in procession. Under his rule, palaces got built. And certain roads—not for the people, but for military transport. But the people were forgotten. And there was no true peace. Just the threat of violence if people didn’t toe the line.

Into this atmosphere of militarism and vainglory comes Jesus. Now, everybody knew by now who Jesus was. But even if there were people left who didn’t know who Jesus was, the gospels tell us that those who were gathered on the edge of Jerusalem that Sunday were his disciples. And certainly they knew who he was. He was an itinerate teacher and healer from Galilee. Nobody—not even those who loved him best—thought of him as any kind of nobility. Nor did they think of him as a strong military figure. And yet, they were still holding out hope that he was The One, the Messiah of God. And remember, Messiah in Greek is Christ. The English term is Anointed. If there was a time and place to find out if they were right, maybe this was it: This was the holy city, and this was the time of year when their people re-told the story of their deliverance from bondage and death.

Now, all the people involved here knew their scriptures. They knew the Torah, of course. They prayed the psalms. And they studied the prophets. And one of those prophets was Zechariah, who predicted the coming of a king. Not a false king like Herod, riding a magnificent horse and coming in the Caesar. But a king straight from the heart of God, a man described as humble—or even lowly—riding on a donkey like David and Solomon—a sign that this was, indeed, the Prince of Peace.

Though we hear this story every year, I’m not sure if we can appreciate how amazing this scene was. Jesus walked everywhere he went, so riding the donkey wasn’t a sign of his humility. It was a sign not only of his kingship, but of exactly the kind of king he would be.

And this was important—because, remember, there were many in Jesus’ day who were calling for open revolt against Rome. Riding a horse into Jerusalem would have indicated that Jesus belonged to this party, the group that wanted to fight their way out of the empire.

But the donkey shouted the opposite message to his disciples on that first Palm Sunday. And it’s time we noticed the donkey, too. This is the week when we, too, re-tell the story of our deliverance from bondage and death. We, too, live in an age when there are more people who are obsessed with fighting than there are people who want to make peace. And yet, all of us call on Messiah—the Christ, the Anointed—to come into our midst, not as a warrior on a steed, but as the humble Prince of Peace.

I don’t know about you, but it’s very hard for me to be that kind of Christian right now. I can’t remem-ber another time in my lifetime when the world has been so united behind a people under attack. It’s hard not to rejoice when we hear of new weapons being sent to Ukraine. It’s hard to mourn casualties among the invaders. Most of all, it’s nearly impossible not to wish for some kind of revenge when we see innocent people—children among them—being targeted by bullets and bombs.

Regardless of how our gut responds, however, we do know that the one response we are all called to make is prayer. I hope that now more than ever we are setting aside time each day to spend with God. Not only because it’s Lent, but also because of the horrific war in Europe.

Almost 200 years ago, a woman named Charlotte Elliott wrote this verse as part of a longer hymn:

Blest is that tranquil hour of morn,
and blest that hour of solemn eve,
when, on the wings of prayer upborne,
the world I leave.

Isn’t that expression, “the wings of prayer,” a nice one? It helps us imagine the otherworldliness of the ecstasy of prayer that transports us beyond the here and now. But today, perhaps, we should not desire such transport into another world, when the blood of this world is crying out so loudly for us to respond. Perhaps our prayers need to be more down-to-earth. Instead of sending our good thoughts into a war zone on the wings of prayer, maybe we should, in thought, word, and deed, send Christ into midst of fighting armies, not on the wings of prayer, but on a beast of burden.

So in the days and weeks and (yes, probably) months to come, let’s remember Christ riding a donkey into the hotbed of controversy that was Jerusalem. Still today, he is the Prince of Peace, entering every conflict, not to take sides, but to bring the presence of God wherever people are threatened. If we don’t know what to pray then, until we find the words, it is enough for our minds to place Jesus in bunkers and bombed-out train stations and on the road with refugees. We know that he can face the worst that can happen, and that, because of what happens in the week to come, in his Name, even death is not the end.

When our prayers cannot soar, then let it be enough to place them on a donkey and send them where the presence of the Prince of Peace is needed most.
—©2022 Sam L. Greening, Jr.