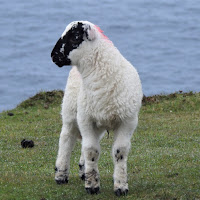 Today was Rally Day at Pilgrim Christian Church. We blessed backpacks during the children's message, and the sermon was based on Luke 15:1-7 and Galatians 5:23b. Our hymns included Jesus Loves Me and Savior, Like a Shepherd Lead Us. After the sermon we sang My Country, 'Tis of Thee because it uses the tune of God Save the King.
A video of the entire service is found below (click on "read more") and beneath that is a transcript of the sermon.

There’s No Law Against It
Here in this section of Luke’s gospel, as Jesus is teaching by storytelling, we’re told that Jesus is being followed by lots of people. If you remember my sermon from a couple of weeks ago, you might realize that most of these people were the ones that might be referred to as “the meek.” These would be the ones nobody else really cared about or paid attention to. But notice I said “most of these people.” Because not everybody was meek. Not everybody hanging around Jesus was voiceless. Not everybody was ignored. There were also some religious authorities in the crowd.

We don’t know why they’re there. It could go either way. There were Pharisees and other teachers who went to hear Jesus because they wanted to catch him saying or doing something they didn’t approve of. It sounds like a bit of a waste of time, doesn’t it? following somebody around just to catch them making a mistake. But there are lots of people like that in the world, so let’s not pretend we’re surprised.

But if we allow ourselves to read what the scriptures actually say, we’ll also realize that not all these Pharisees and teachers of the law were inclined to be Jesus’ enemies. Some of them were genuinely interested in what he had to say. Some even defended him and tried to warn him and protect him when they knew trouble was brewing.

Based on what happens in this story, it’s not immediately obvious which of these two groups these particular religious authorities belong to. My first guess would be the group that wants to catch Jesus doing something wrong. But Jesus’ behavior is so far removed from the tradition, that even his friends might have been concerned about the people Jesus was being seen with. They might have been trying to nip these friendships in the bud in order to protect Jesus.

If I had to guess, though, I’d probably say that the religious authorities in today’s gospel reading were from the first group, the ones who were critical of Jesus, and would be only too happy to catch him doing the wrong thing. Not only was Jesus hanging out with sinners and tax collectors, they said, but he was eating with them.

We don’t know exactly what kind of sinners these were, but in other places we see that Jesus didn’t turn anybody away. They might have been people who hadn’t been keeping kosher. They might even have been prostitutes. Tax collectors, though, we do know about. They seem rather tame to us. What’s wrong with breaking bread with somebody who works for the IRS? But I know you’ve heard me say (and you’ve probably heard other pastors say) that tax collectors in territories occupied by the Roman Empire were not innocent collectors of revenue. They were thugs and traitors who worked to worsen the lives of their own people, and whose salary depended on how much money they were able to force people to pay. To say they were social pariahs is putting it mildly.

How did “the meek” react to this? What did the least among us think when Jesus hung out with the worst among us? They might have thought it was great. Or they might have been scandalized. Or it might just have varied from person to person. But to the Pharisees and to the teachers of the law, Jesus had something to say. He might have lectured them, I suppose. But he didn’t. He really never did, did he?

Instead he told them a story. And when Jesus tells a story, we usually have a special name for it. And that name is parable. Parables aren’t complicated stories. Nor are they long. They’re simply short illustrations intended to describe what life is like in the Kindom of God. And the life Jesus describes is almost always different from the life we experience in the world as we know it. In fact, sometimes the life described in the parables is upside down from the life we’re used to. It’s not magical or supernatural. It just shows us that God’s values are not always our values.

And the parable that Jesus tells the religious authorities in Luke 15 is a perfect example of this re-valuing that needs to go on in our lives if we’re to experience—and appreciate—life in the Kindom of God. It’s a story about a shepherd and a lost sheep. The story seems to assume that the shepherd would leave 99 sheep in the wilderness in order to find one lost, but this doesn’t make any sense in my way of thinking.

Which is a perfect illustration of the fact that my thinking doesn’t line up with God’s way of thinking. I would stick to the majority of the sheep which I can see, and leave the lost one on its own. But in God’s Realm, the lost sheep is worth at least as much as the safe ones. And if we’re to take what Jesus says at all seriously, it even appears that the lost sheep is worth more. It reminds me of the story of the mother who was asked which of her children she loved the most, and she replied, whichever one needs me the most.

Perhaps that’s a description of God. The “good” people of Jesus’ day wondered why he risked himself—maybe not his physical safety, but certainly his reputation—by spending time with people others considered to be lost causes. Why would he break bread with them, when there were hundreds—maybe even thousands—of decent folk he could dine with. And the answer is simple: In the Kindom of God, the first shall be last and the last shall be first. When we place God in charge of our lives, then we realize that there are no lost causes. If God goes in search of someone, they will be found, no matter how good they’re hiding. And if God rescues someone, they are saved, no matter how bad off we thought they were.

You probably grew accustomed over the last two or three months to hearing me read to you the Fruits of the Spirit found in Galatians 5:22-23. One phrase was repeated each time I read that list, and that was this one at the end: There is no law against such things. Though Paul said a lot of Christ-like things, I think perhaps this little sentence is more in the Spirit of Jesus than anything else he said or wrote. Whenever we start getting too religious, whenever we start putting rules ahead of people, whenever we start to think Christianity is an excuse to judge or exclude or even to hate, let’s remember Jesus’ parable that explained why he hung out with the wrong people. And let’s remember that the Holy Spirit produces this kind of fruit in our lives: love, joy, peace, patience, kindness, goodness, faithfulness, gentleness, and self-control. There is no law against these things!

How might our understanding of Jesus’ parables improve if we interpreted them according to the fruits of the Spirit. And this is true of all scripture. Instead of figuring out how we might use the Bible as a weapon against sinners, how about we instead pray for big-heartedness and open-mindedness to interpret what we’re reading? The life and teachings of Christ were a lot less about enforcing the law than in looking at any situation and asking, “What can love accomplish here that judgment cannot?”
—©2022 Sam L. Greening Jr.